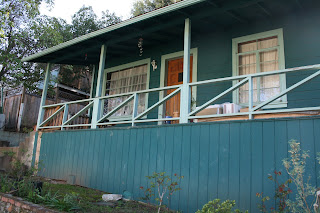 The Old House sits at the top of the hill, affording good views of the Mother Lode Community of Sonora, CA a Gold Rush City.

The home is for sale and access to the home is parking on the city street and climbing rows of stairs.

A potential buyer made an appointment to preview the home with a Buyers Broker.

Upon further inspection the wall extended 8" from its original support and is sloping towards the city street.

With potential heavy rains, the potential for a wall collapse is evident.

The buyers Broker asked the listing Broker of any disclosures and the response was the agent had never noticed the buckled wall.

California civil code 2079 make it very clear that on one to four residential property include a
visual inspection to observe conditions which might affect the market value of the property and then entering those observation on Property (Transfer) Disclosure Statement.

The Buyers Broker would have the same obligations.

If the agents missed these disclosures, a future disaster for liability exposure would go beyond the potential collapsed retaining wall.

It is the wise agent, who will make a visual inspection and disclose.

A Diability and a Dispute

A Disability, and a Dispute

THE first thing that Barbara Gutmacher Girard asked about before signing a contract two years ago to buy a condominium at the Plaza Hotel was access for the handicapped, she recalled last week.
The question stems from a dispute that developed after Ms. Girard and her elderly mother, Rose Gutmacher, leased adjoining suites, for a total of $37,500 a month, at the Waldorf-Astoria Towers, the exclusive upper floors of the famed hotel on Park Avenue at 49th Street.
After moving in, in November 2003, the women found themselves caught up in disputes with the hotel management. The hotel had offered them a long-term lease in the tower but then abruptly withdrew the offer, raising the rent to $63,690 a month. The hotel asserted that Ms. Girard’s mother, who uses a wheelchair, created problems by repeatedly calling guest services for help in locating her daughter or a health aide, according to press accounts at the time.
They moved a few blocks away to the Towers, at the New York Palace Hotel, on Madison Avenue near 50th Street. In January 2005, they filed an $8 million discrimination lawsuit against the Waldorf, claiming violations of laws protecting the disabled.
In late February, a settlement was reached. The terms were confidential, and Ms. Girard’s lawyer, Marshal B. Bellovin, declined to discuss them, as did officials at the Waldorf.
But a handwritten stipulation in the court file indicated that though there was no finding of fault, the Waldorf agreed to pay $15,000 to a charity, the International Committee Against Mental Illness. In addition, the hotel agreed to install a curb cut near an entrance to the Waldorf on East 50th Street, and to inspect a ramp to make sure that it “supports an individual seated in a wheelchair” and that it “does not sway from side to side.”
A year after the suit was filed, Ms. Girard signed a contract on a condominium at the Plaza, which is on Fifth Avenue at the foot of Central Park. A couple of weeks after the suit was settled, she closed on a sprawling 1,760-square-foot two-bedroom on the 18th floor. The price was $4.7 million, according to property records filed last week.
But Ms. Girard said in a recent interview that in the last two years, she and her mother had become so comfortable at the New York Palace that they had not yet decided when and if they were going to move into their new condo.