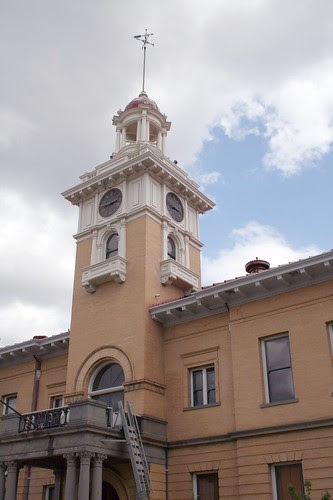 Tuolumne County Courthouse, a photo by JimHildreth on Flickr.

I have worked for months on a dispute involving co-owners of a property. The mediation brought about many changes and today we reached a settlement agreement and mutual release in mediation. It was a pleasure working with all sides, including Attorney David Hamerslough of San Jose.

Posted by Jim W Hildreth at 1:50 PM No comments:

C.A.R. INDEPENDENT CONTRACTOR AGREEMENT REVISED DUE TO RECENT COURT DECISION
C.A.R. will release a revised standard form Independent Contractor Agreement (Form ICA) through zipForm® on or about June 15, 2011.  As between brokers and their salespersons and broker associates, the ICA will now mandate mediation for any disputes that may arise and, if mediation fails, the ICA recommends, but does not require, arbitration at the local Association of REALTORS® (AOR).  C.A.R. revised the ICA because a previous version requiring arbitration of disputes at the AOR, absent more, was recently deemed unenforceable in the Fourth District as discussed below (Wherry v. Award, Inc. (2011) 192 Cal.App.4th 1242, 123 Cal. Rptr.3d 1, review denied (April 27, 2011)).  This case does not impact the overwhelming majority of arbitrations which are those between REALTORS® of different firms.  It also does not impact the arbitration clause in the C.A.R. Residential Purchase Agreement, Residential Listing Agreement, and other C.A.R. forms.
Posted by Jim W Hildreth at 10:33 AM 1 comment:

Tears fall at a Mediation

The Historic Court House with marble floors and old fashioned wrought iron was the backdrop for a lawsuit that involved landlord & tenant.

The two men stared and would not look at one another, the court called out their names. They both responded with a yes and what caught my eye as the court appointed mediator, is they shared the last name.

The crowded court room was silent and the voice of the judge said the landlord tenant would be going to mediation and if it did not work out a trial would be that day.

I was assigned that mediation, and I asked the silent men to follow me to the jury assembly room.

I introduced myself and asked if the were related?.

The response in a muffled tones were they we were father and son.

Father had previously evicted his son and received a judgment from another judge, today was trial for damages for the maximum allowed in a California Small Claims of $7,500

The father and son each told a story, demanding of money and the other willing to go to trial.

Something told me there were issues deeper than the demand of $7,500.

I suggested that I would like to share time with each of them and their our conversation's would be confidential.

As time passed, the landlord tenant issue was only the tip of the iceberg, and issues of anger, resentment, trust, control, love, the introduction and desire to see for the first time a grandchild by a grandfather surfaced.

Memories of camping and fishing trips in years past. A failed marriage.

The father burst out with tears flowing, that it was not about the money, but wanting a son to be in his life, as he loved him.

He wanted only a telephone call, a birthday card  and a dream of seeing a grandchild.

I took a deep breath and my own tears began to flow, the 2nd time in my 5 year mediation career.

The son wanted to trusted and not be controlled. He wanted his independence.

Both new that family was important but neither side would budge.

Little by little, as the neutral, I began a process of building trust and offering empathy.

I took a risk and as the mediator I rose from my chair and asked them to hold my hand and offered that at that moment it was a time to start the healing process, I then asked them to shake and touch each others hand with a handshake.

The two joined, hand to hand, father to son, son to father.

In the mediation the father dropped his lawsuit and the written agreement between one another was stated , "Father and Son have begun a healing process to preserve a family relationship".

Upon return to the court, the judge reached out to both father and son and accepted the settlement, knowing that new beginnings were made possible and family unity had the greater value than a judgment.

As a the mediator, my own tears flowed with the emotion of a family dispute that went deeper and beyond a landlord tenant dispute.

I am glad that I played a role as a mediator in being apart of bringing a family together.

Mediation is a valued alternative to litigation.

Jim W Hildreth is a California based mediator who's focus is Real Estate Disputes.
Posted by Jim W Hildreth at 8:29 PM 1 comment: